You are here: Home / Health & Fitness / List of the Best Anti-Inflammatory Foods

Inflammation is an integral part of the body’s immune system. Primarily used as a means of fighting infection, it’s an important auto-response that works to remove harmful stimuli – such as damaged cells – and kick start the body’s natural healing process. However, not all inflammation is useful and in some cases, such as with rheumatoid arthritis, can cause a lot of pain to the sufferer. When inflammation gets out of control, the focus shifts from letting it run its course to actively trying to reduce and prevent inflammation. 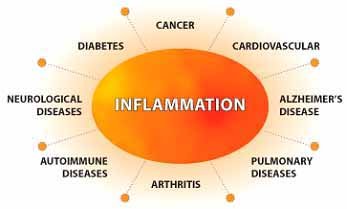 There are many methods that are used by the medical profession to fight inflammation, but many of them rely on powerful medications or invasive procedures. Because of this, there is a growing number of people who have chosen to fight inflammation in a more natural way – with food. The anti-inflammatory food diet isn’t so much a diet as it is an eating plan for life. This plan isn’t about losing weight or getting fit; instead, it’s about taking care of your insides in such a way as to reduce the risk of certain conditions and improve the body’s overall defences.

There are loads of different types of anti-inflammatory foods; so many, in fact, that we probably haven’t yet identified all of them. However, these are some of the most common groups:

Fish such as salmon, tuna and sardines, are high in fatty acids (Omega 3 – EPA & DHA) which have been proven to combat inflammation. But in order to see any real effect from eating fatty fish, you will need to include it in your diet at least several times a week.

Colourful fruit and veg should always be included in a healthy diet, but hot peppers are particularly useful in fighting inflammation. In fact, one of the chemicals most commonly used in topical anti-inflammatory creams – capsaicin – is derived from peppers such as chilli and cayenne.

Scientific studies have shown us that garlic and onions are particularly good at fighting inflammation. They contain chemicals such as quercetin and allicin, which have the ability to shut off pathways that lead to inflammation.

Dairy can sometimes exacerbate inflammation and so sufferers should take care not to include too much in their diet. However, low-fat dairy containing probiotics will work wonders for anyone suffering from inflammation of the gut.

Nuts are rich in antioxidants, which can help your body to repair the damage caused by inflammation.

Whole grains have long been known to have beneficial properties, but not many people know that they can also help fight inflammation. They contain more fibre, which we now know is able to reduce levels of C-reactive protein (an indicator of inflammation), and also contain less sugar than their refined counterparts.

Soy contains isoflavones, which are oestrogen-like compounds. This means that soy is particularly useful for women who are struggling with inflammation in their body. But try to stay away from soy which has been over-processed; these usually contain a lot of preservatives.

The Benefits of Anti-Inflammatory Foods

The benefits of anti-inflammatory foods should be self-evident. People living with chronic inflammation can suffer in pain for years, and often have to rely on a cocktail of medications to help alleviate their symptoms. But taking a more holistic approach to combatting inflammation may go some way to helping address the root cause of sufferers’ symptoms, and the above list of foods is also recommended by doctors as part of healthy eating guidelines. For people who suffer in particular with gut-related inflammation, changing their diet could prove to be invaluable.

Even if you don’t sufferer from a condition that presents with noticeable inflammation, eating the above foods can help to prevent and address inflammation in your internal organs – including your brain. Scientists believe that certain conditions, such as Alzheimer’s, may be (at least in part) triggered by inflammation. Inflammation sufferers may feel absolutely fine, but all the while be suffering from undiagnosed inflammation. Sticking to an anti-inflammatory diet can help to prevent conditions from developing or – if they are already present – from getting worse.

How Anti-Inflammatory Foods Can Help with Weight Loss

Eating anti-inflammatory foods won’t necessarily help with weight loss, but can be included as part of an ongoing weight loss plan. They can help in one of two ways: firstly, in that the alleviation of chronic pain may allow sufferers to engage in exercise, and secondly, that they all fall into the ‘healthy’ end of the nutrition spectrum. If you’re looking for a diet that will help you to lose weight and fight inflammation at the same time, this is definitely the diet for you. In addition, so many of the foods listed above contain vitamins and nutrients which are essential for a healthy life, you’ll probably find that you feel more healthy in general, after following the anti-inflammatory diet for just a short amount of time.

The anti-inflammatory foods diet is actually one of the easiest diets to follow. It’s not a fad, nor does it rely on a particular gimmick. In fact, it’s very close to the traditional diet of people living in the Mediterranean, who in general tend to report better qualities of health than people in the rest of the world.

There are lots of places online where you can find out more information about following an anti-inflammatory diet, including medical recommendations and research performed by scientists. But perhaps the best way of integrating this diet into your everyday-to-day life is to simply get stuck in. Research some healthy Mediterranean recipes, have the kids come up with some ideas and invite your friends round for a feast. In no time at all you’ll be combatting inflammation in a safe, natural and healthy way, and you’ll be having fun too!